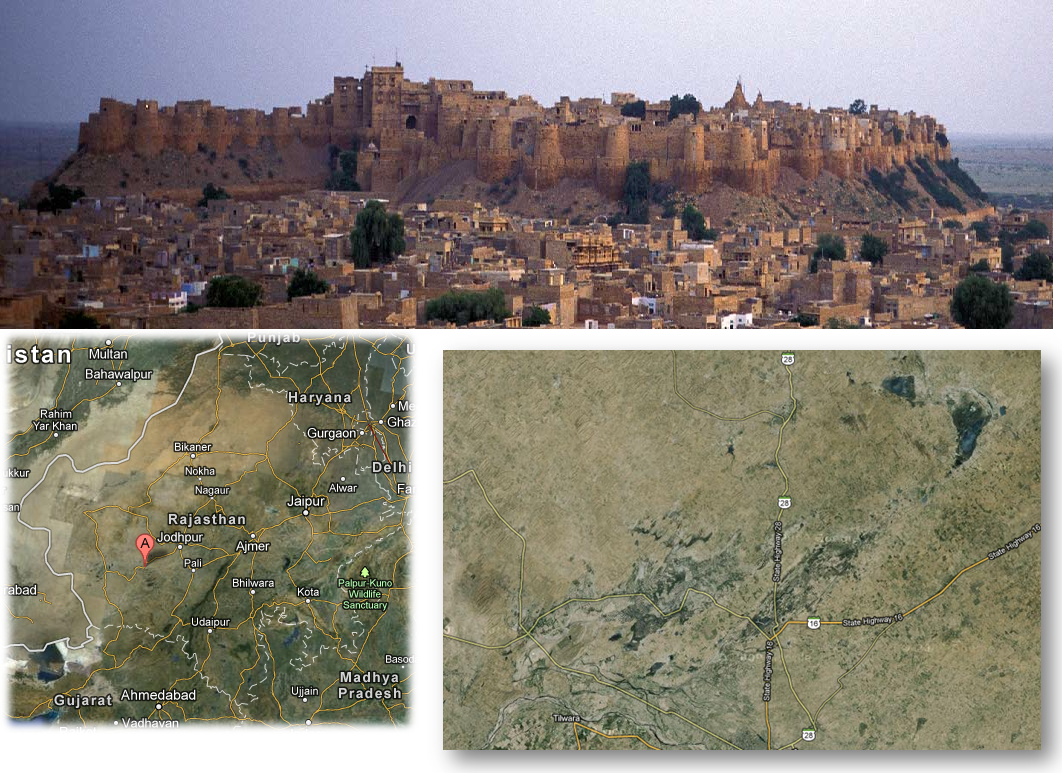 As accredited in the book :

We've Never Been Alone: A History of Extraterrestrial Intervention

2. Satellite Image of Exact Location of the Site.

Radiation still so intense, the area is highly dangerous.

A heavy layer of radioactive ash in Rajasthan, India, covers a three-square mile area, ten miles west of Jodhpur. Scientists are investigating the site, where a housing development was being built.

For some time it has been established that there is a very high rate of birth defects and cancer in the area under construction. The levels of radiation there have registered so high on investigators' gauges that the Indian government has now cordoned off the region.

Scientists have unearthed an ancient city where evidence shows an atomic blast dating back thousands of years, from 8,000 to 12,000 years, destroyed most of the buildings and probably a half-million people.

One researcher estimates that the nuclear bomb used was about the size of the ones dropped on Japan in 1945.

The Mahabharata clearly describes a catastrophic blast that rocked the continent.

flying a swift and powerful vimana

Charged with all the power of the Universe.

An incandescent column of smoke and flame

As bright as the thousand suns

Rose in all its splendour...

with its billowing smoke clouds...

...the cloud of smoke

rising after its first explosion

formed into expanding round circles

..it was an unknown weapon,

A gigantic messenger of death,

Which reduced to ashes

The entire race of the Vrishnis and the Andhakas.

...The corpses were so burned

As to be unrecognizable.

The hair and nails fell out;

Pottery broke without apparent cause,

And the birds turned white.

After a few hours

All foodstuffs were infected...

...to escape from this fire

The soldiers threw themselves in streams

To wash themselves and their equipment. “

Historian Kisari Mohan Ganguli says that Indian sacred writings are full of such descriptions, which sound like an atomic blast as experienced in Hiroshima and Nagasaki. He says references mention fighting sky chariots and final weapons. An ancient battle is described in the Drona Parva, a section of the Mahabharata. "The passage tells of combat where explosions of final weapons decimate entire armies, causing crowds of warriors with steeds and elephants and weapons to be carried away as if they were dry leaves of trees," says Ganguli.

"Instead of mushroom clouds, the writer describes a perpendicular explosion with its billowing smoke clouds as consecutive openings of giant parasols. There are comments about the contamination of food and people's hair falling out."

Archeologist Francis Taylor says that etchings in some nearby temples he has managed to translate suggest that they prayed to be spared from the great light that was coming to lay ruin to the city. "It's so mid-boggling to imagine that some civilization had nuclear technology before we did. The radioactive ash adds credibility to the ancient Indian records that describe atomic warfare."

Construction has halted while the five member team conducts the investigation. The foreman of the project is Lee Hundley, who pioneered the investigation after the high level of radiation was discovered.