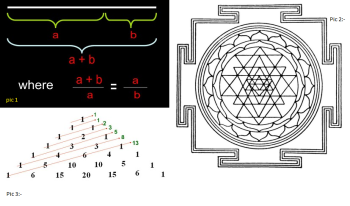 As I was going through a blog, I read references to the Golden Ratio (1.618), a figure sacred to designers. The Golden Ratio is also known by the number phi, and is otherwise called the Golden mean, Divine Proportion or the Golden section. This ratio can be described from the figure:

As is seen, the ratio of one of the sides to the other is the same as the ratio of the sum of the sides to the former. This Golden Ratio has prime importance in architectural design, as it lends a very aesthetic appearance to the object. The Pyramids in Egypt have their dimensions in a proportion equal to it. Leonardo da Vinci, the famed inventor and artist, has used the Golden ratio is many of his creations, most famously; the Vitruvian man (brought into limelight through the book "The Da Vinci Code"). Even the ratio of Fibonacci numbers (1,1,2,3,5,8,...) is successively approximate to the Golden ratio.

I wanted to find out what relevance the Golden Ratio had to India and Hinduism, and I did find something interesting. Many of you would have come across the Sri Yantra, an object of meditation that finds place in Puja Rooms: -

Now, Sri Yantras are formed by 9 interlocking isoceles triangles. 4 of them point upwards and represent the female energy Shakti, while the other 5 point downwards, representing the male energy Shiva. These triangles are not ordinarily composed, but have aspects of the Golden Ratio in them. Just as we can have rectangles drawn to the specifications of the Golden Ratio, triangles too can have their properties.

Triangles have 3 variates: The base length, the slant length and the height. The angle also plays a major role. What is amazing is that the triangle of the Yantra is a proportionate cross-section of the Giza Pyramid, incorporating both special numbers pi (3.142...) and phi (1.618...) ratio. And the base angle of the triangle in the Yantra is seen to be around 51 degrees, the same value that was attributed to the base of the Great Pyramid of Giza.

The standard form of the Sriyantra, with the 9 interwoven triangles, constitutes a total of 43 triangles. Different versions have circles and squares surrounding the triangles, and they are said to form the boundary within which Gods residing in the intersections can stay. The centre of the Yantra has a Bindu (dot), which is the focus of the way you can meditate. You can either start from the inside and move out, or do it vice versa. The former is seen to be a constructive view, while the latter a destructive one.

The Sriyantra might look a fairly simple design, but the construction is a highly complex affair. There are innumerous intersections that take place between the lines of the 9 triangles, and these cuts are supposed to be concurrent. Thus, changing the position of any one shape will require adjustments in all the corresponding figures. If the intersection of the lines does not happen at a particular point, the concurrency is lost, and so is the significance. There is a lot for research going on to find out the true meaning of the Sri Yantra. Some consider it the primordial source of life, and there was a finding about how it was a manifestation of the DNA form, etc. also

Now, there is another separate reference to the Golden Ratio in connection with Kuber, the God of Wealth. It is said that Lord Kuber's treasure, the most prized collection of wealth in the universe, is hidden inside the mystical Mt.Meru. This is guarded by Nagas, or serpents. Now, Mt.Meru is also the name given to a special triangle formed by the ancient mathematician Pingala, and is called MaatraMeru. And this triangle is today called the Pascal's triangle, which some of you might be familiar with:

What is of interest (as you will observe in the above figure) is that when you move diagonally upwards starting from the first digit on each line and sum the corresponding digits along each diagonal, you end up getting the numbers of the Fibonacci series, which in-turn are in the Golden ratio. Thus, it can be inferred that our ancient texts give special importance and reverence to this "divine ratio", forming it the basis of how one reaches the treasure of the Gods.

Reply Siddarth
12:07 AM on March 31, 2013
Namaste,
Only one out of four pictures is visible above.
Kindly re-insert them.

Reply dimodi
2:11 AM on April 16, 2013
Namaste Siddarth !!!
I am glad that you noticed that and informed me.
Actually the Pictures are not missing but they are in the Top merged image only with respective Serial No alongside. if you feel these should be separated, Please let me know and I'll be more than happy to update them that way.
Thanks once again.

Reply XenMab
11:26 PM on June 3, 2019
In this age people share videos so many times a day they need a decent and safe application to do this task. Xender app is one of them. With the app you can transfer your images everywhere you want, from your iPhone to iPhone and vice versa. You can download Xender for free!